FREE Shipping on all orders over $20 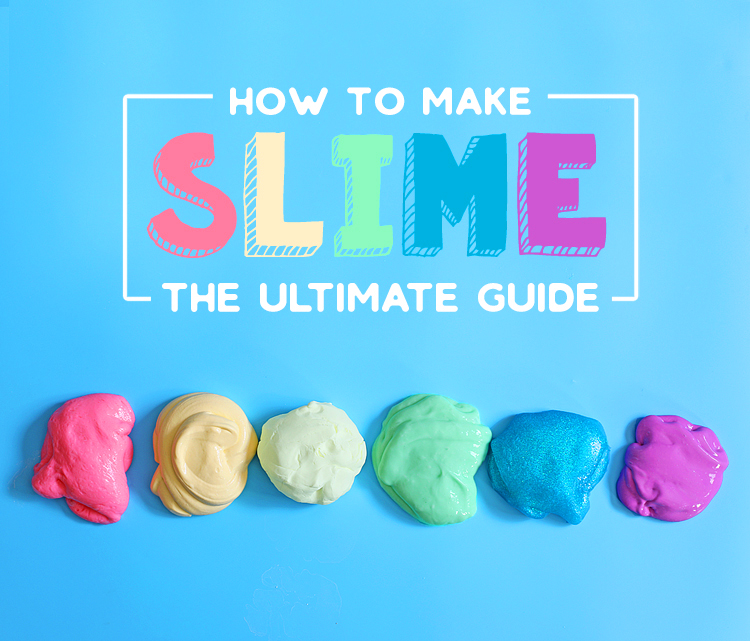 How To Make Slime. This ultimate guide to making slime will teach you the very best tried-and-true slime recipes plus troubleshooting tips, slime videos and everything you need to know to make the best slime ever!

Have you tried making slime? It’s so much fun! But there are dozens of slime recipes out there and when we first started making slime, we had some pretty epic failures. So we decided to do some testing to find the best slime recipes ever. We tested dozens of different types of slime and learned a ton about how to make slime— what works and what doesn’t. This post will teach you everything you need to know to become a slime master!

If you would rather watch a slime video, scroll down to the bottom of this post! I have also included a printable page with all six slime recipes so you can print it out to refer to while you make slime. It’s at the very bottom of the post too!

What do you need to make slime? 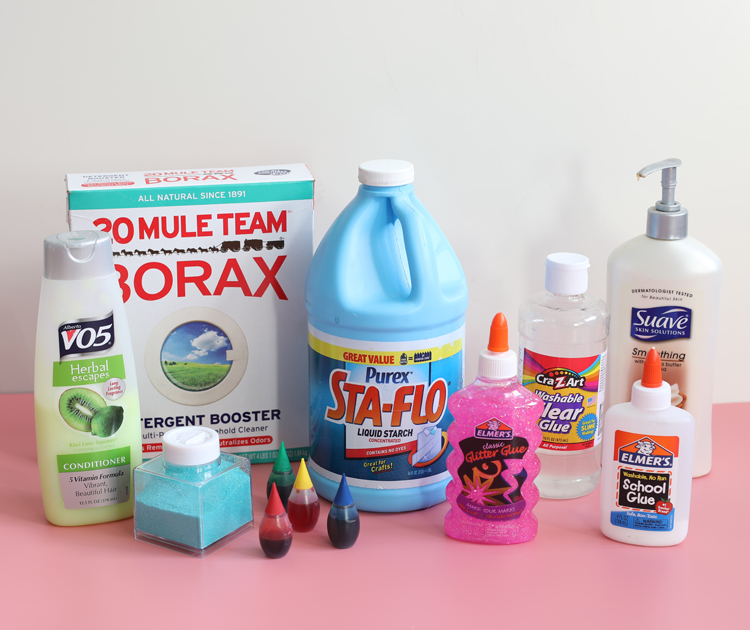 Slime can be made in several different ways, but basically you need two parts: glue and an activator.

These are the most common slime activators:

We had great success with both borax and liquid starch, but time and time again we had problems using baking soda and contact solution, so we don’t recommend recipes that use them. We didn’t like contact solution slime at all! We also found a recipe that doesn’t require glue, so you can still make slime even when you’re out of glue. 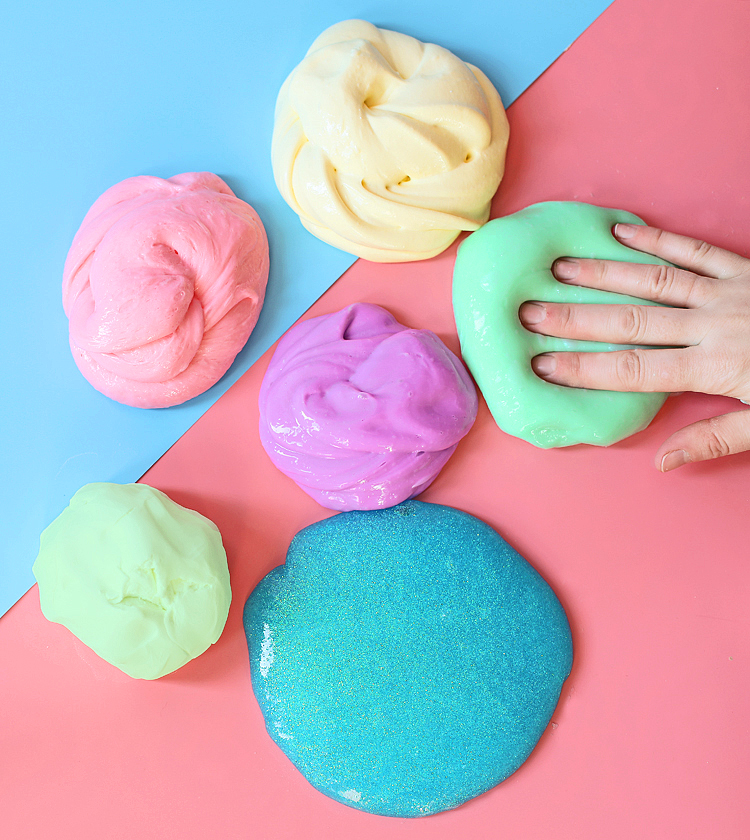 How Do you make DIY Slime? 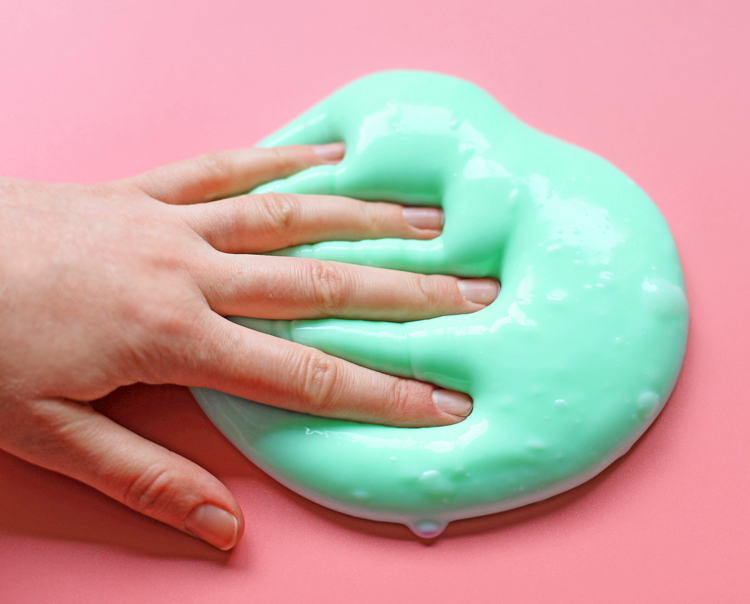 We’ll start with the classic slime recipe using white school glue and Borax. We like this recipe because the slime is stretchy, durable and really fun to play with. Borax can be purchased at stores like Walmart in the laundry detergent aisle.

It’s a powder that comes in a big box, so to use it for making slime, you’ll have to dissolve it into hot water. Once you have mixed up the Borax solution, you’ll have way more than you need for just one batch of slime. We put ours into a little travel sized bottle so we could save it for later.

Troubleshooting Tips: If your slime is sticky, add more borax. But be careful… if you add too much, the slime will be too stiff and lose its stretchiness. 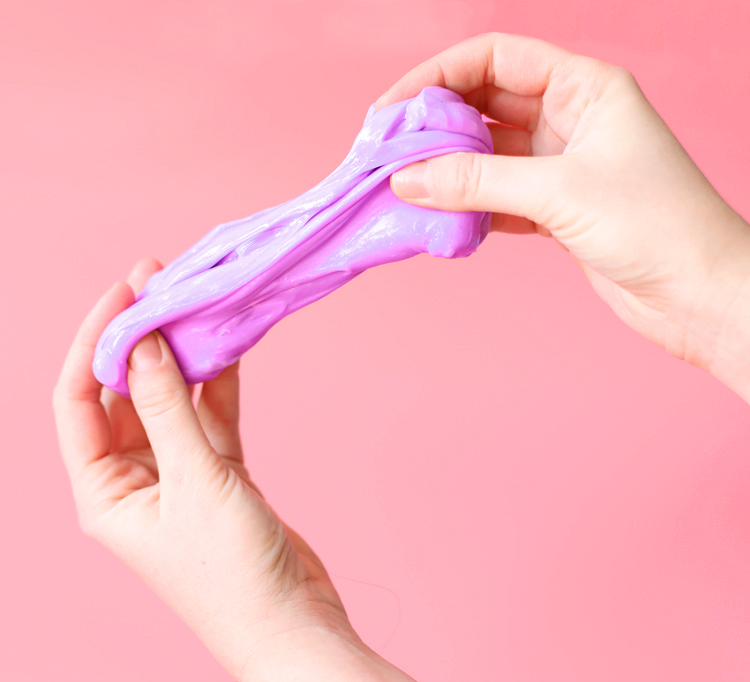 How do you make slime without borax?

Some people have concerns about children using borax because it can cause skin irritation. Have no fear! We have a really great slime recipe that doesn’t use any Borax.

For our borax-free slime recipe, we used liquid starch. This is also available in the laundry aisle at stores like Walmart and a giant bottle is only a few dollars. Yay! This slime feels almost exactly the same as the borax slime. We love that it’s stretchy and fun to play with and it’s easier to make than the classic slime recipe. We actually prefer this slime recipe over the one with borax!

If you want extra stretchy slime, add a squirt of hand lotion to the mixture and smoosh it in. Not only will your slime be stretchier, but it will smell amazing too! 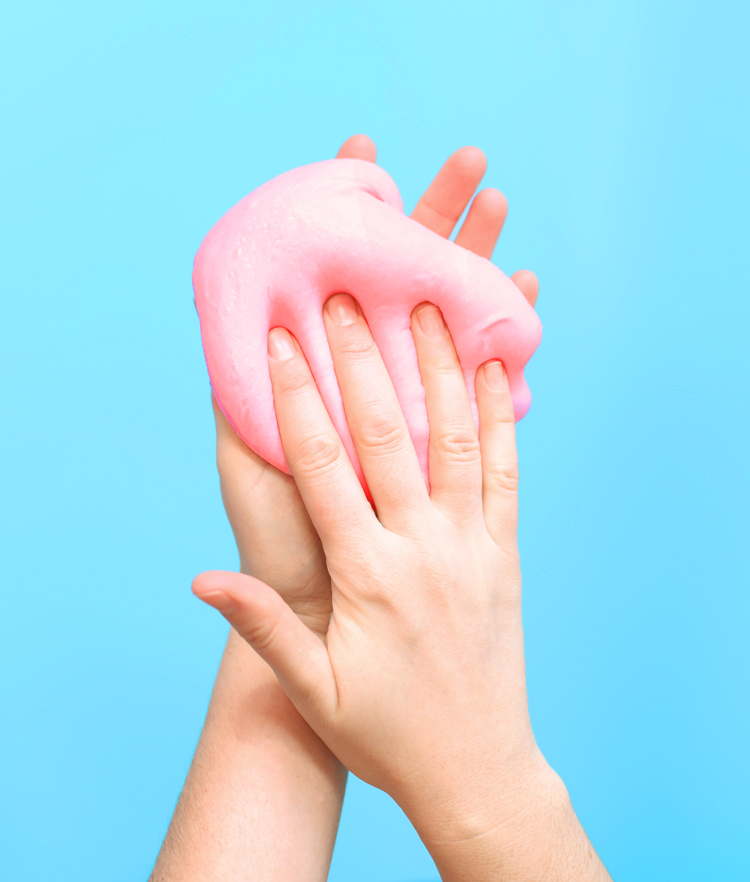 How do you make fluffy slime?

The next slime recipe is our favorite because of its unique, fluffy texture. Fluffy slime is light and airy but still stretchy. It’s like playing with a cloud!

1. Pour glue into a bowl.
2. Add food coloring and mix together.
3. Add starch, shaving cream and lotion.
4. Stir until the mixture comes together.
5. knead with hands until no longer sticky. 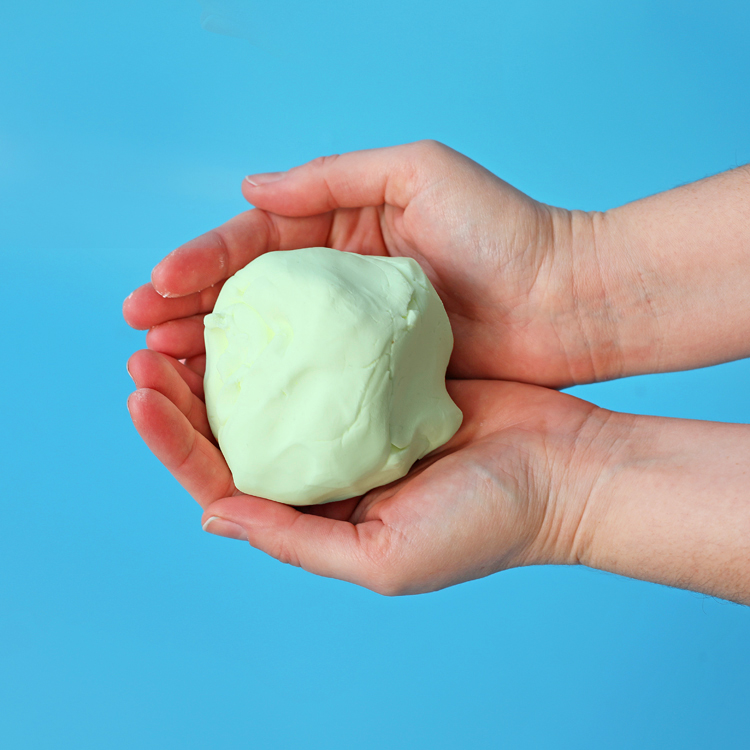 Can you make slime without glue?

What if you want to make slime, but you’re out of glue? This next recipe is for you! We were able to make a fun slime that doesn’t require any glue. It isn’t as stretchy as the other slime recipes and is a bit messy, but it has a powdery soft texture and is still fun to try.
Slime Without Glue

1/2 cup conditioner or dish soap
cornstarch
1. Measure conditioner and pour into bowl.
2. Slowly add cornstarch until the mixture is no longer sticky.

You don’t need to add food coloring to this slime because it will stay the color of the dish soap or conditioner. This slime was our least favorite, but in a pinch it works. It doesn’t last overnight either, so if you make this slime, you can only play with it for a day before it gets too crumbly. It smells great, though! 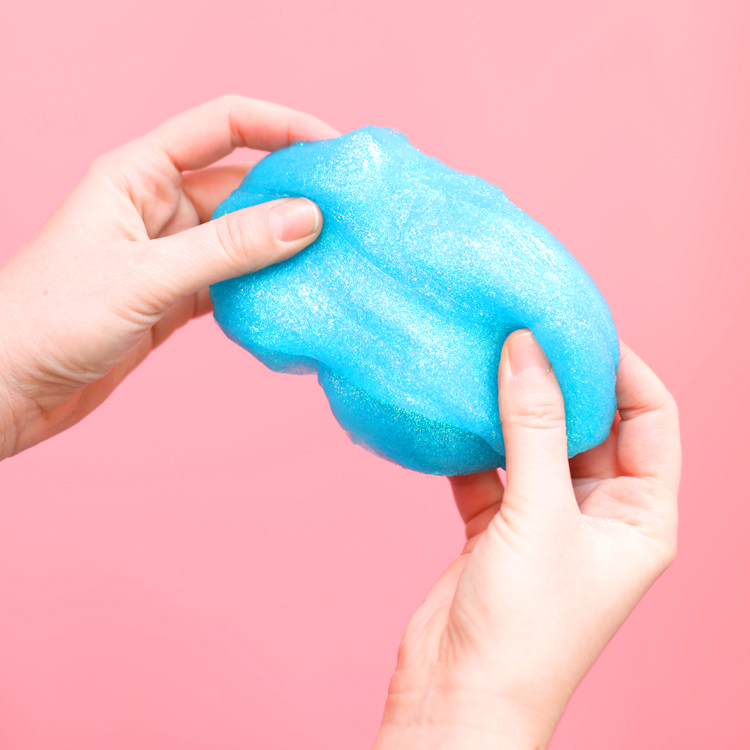 How do I make clear slime?

Clear slime is the prettiest because the colors are more vibrant. It’s the best kind of slime to add glitter to, because you can really see it. You can make clear slime with either borax or liquid starch as the activator.

1. Dissolve borax into hot water. Set aside.
2. Pour one 4 oz. bottle of glue into a bowl.
3. Add water and food coloring. Stir.
4. Add borax solution 1/2 teaspoon at a time
until glue mixture thickens.
5. Knead slime with hands until no longer sticky. 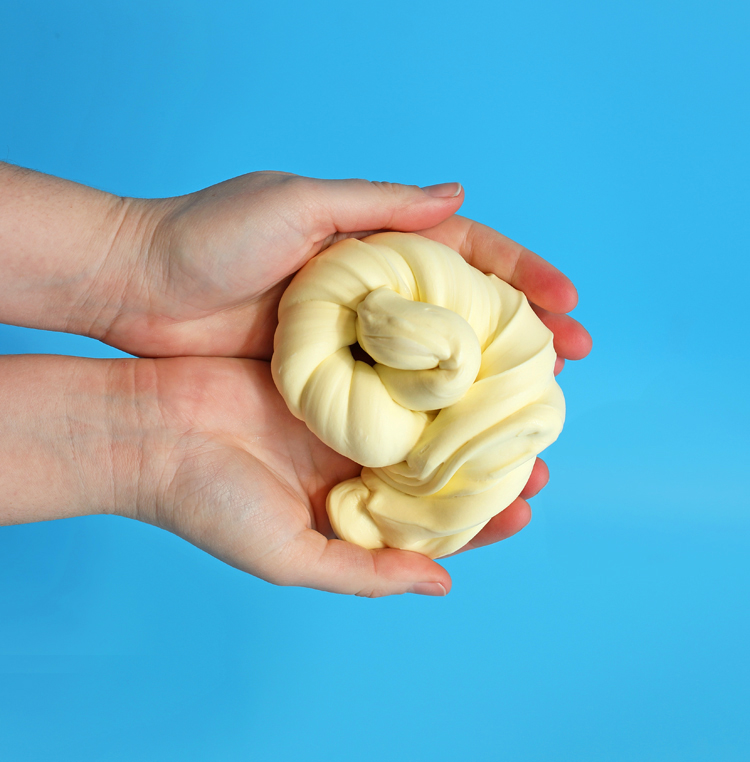 How do I make butter slime?

Butter slime is hands-down our favorite slime as far as texture. It’s soft and stretchy and forms really cool shapes. And it’s not sticky or wet at all! The only downside of butter slime is that it takes a special ingredient, Model Magic. You can buy it in the kids craft aisle at Walmart, but it’s much cheaper on Amazon.

omit the water and add 1/4 cup liquid starch
1. Dissolve borax into hot water. Set aside.
2. Pour one 4 oz. bottle of glue into a bowl.
3. Add water and food coloring. Stir.
4. Add borax solution (or liquid starch) 1/2 teaspoon at a time
until glue mixture thickens.
5. Knead slime with hands until no longer sticky. Add more borax or liquid starch if it’s still sticky.
What can I add to slime?
The best part of making your own slime is that there are so many fun ways to personalize it! Once you’ve mastered one or two of the recipes above, you can get creative and make all kinds of fun slime variations.

Here are some of our favorite things to add to slime:
• Glitter makes slime look so pretty and sparkly!
• Foam Balls give your slime a really fun, bumpy texture.
• Confetti will give you lots of color variation. Just be sure to pick metal confetti (without sharp edges) because paper confetti will dissolve in the slime.
• Cut Up Rubber Bands add color and texture. We used our stash of loom bands from making rubber band bracelets.
• Craft Paint will give you the brightest, most saturated colors of slime and there are more colors available than just using food coloring. Just squirt a dollop of paint into the glue at the same time you would normally add food coloring and stir to mix it in. The price on Amazon is high, so I’d buy it at a craft store.
• Beads are a fun addition and there are so many different sizes, colors and types available.
• Metallic Eyeshadow Powder gives your slime the look of liquid metal!
• Glow in the Dark Powder

We also found this awesome slime kit that has lots of cool slime add-ins all in one. It’s going on our Amazon wish list for sure! 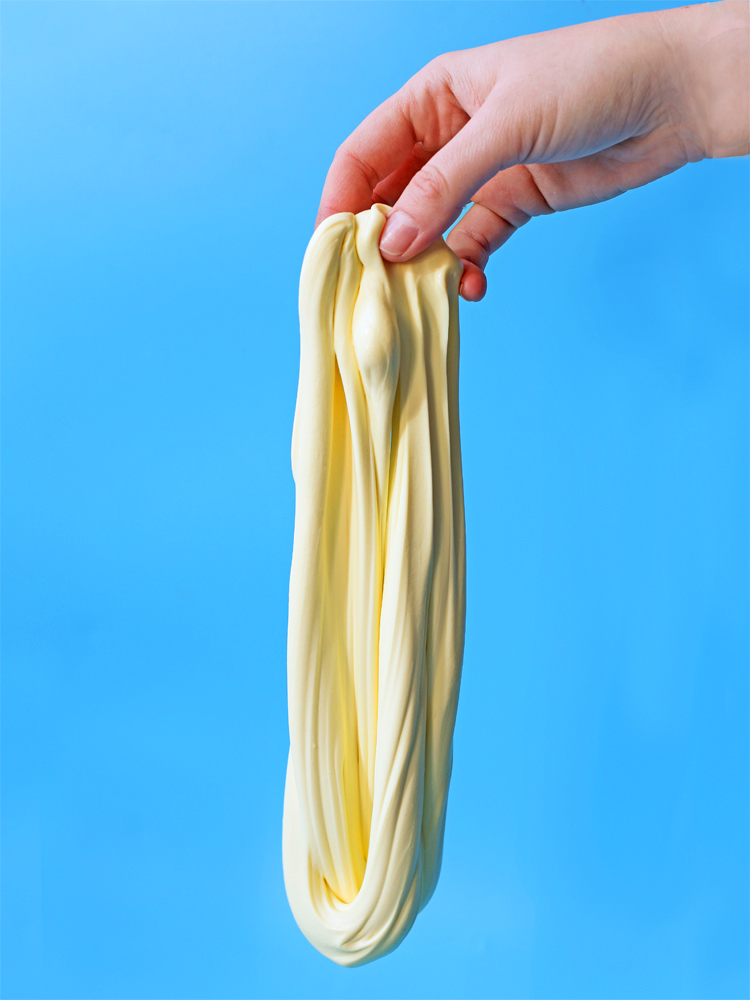 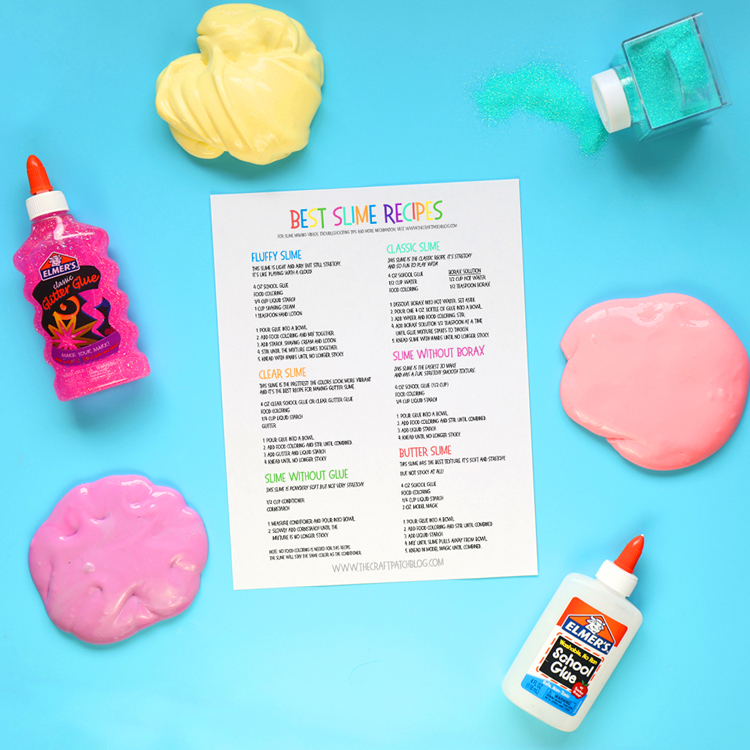